UK – A year ago, Saietta Group plc of Upper Heyford, UK was fully engaged in making electric powertrain components for two-wheelers and microcars. It had a partner in India and was experiencing sales success with revenues of GBP795,000 for the six months between the end of March and the end of September – up from GBP56,000 in the first half of 2020. In July, the company went public and managed to raise gross proceeds of GBP37.5m by listing on the AIM.1 It appeared to be entirely committed to the massive market for lightweight two-, three- and four-wheeled electric vehicles in Asia.

Then, in November of 2021, Saietta made an unexpected move. It acquired e-Traction Europe BV – now Saietta Europe BV – from the ‘new energy vehicle’ subsidiary of Chinese property giant Evergrande. Based in Apeldoorn in the Netherlands, e-Traction was quietly designing and making electric drivetrains for buses, as well as supplying high-voltage power electronics such as inverters and control systems. Their market was entirely different to Saietta’s; yet, a year later, the Dutch engineers are now charging full throttle, on the impetus of Saietta, in designing powertrain components not only for buses but for heavy trucks and trailers.

It is difficult to overstate the importance of the e-Traction acquisition for Saietta. According to a spokesman for the company, the purchase has “fast-tracked” Saietta’s electric powertrain development by two to three years. Today, the company is already promoting its products for bus, truck and trailer applications, which it hopes to put into series production by the end of next year.

Founded in 2008 under another name, Saietta was originally created with the intention of manufacturing electric motorcycles. It achieved a breakthrough in November of 2020, when it secured funding from the Advanced Propulsion Centre to ramp up production of a novel design of electric motor. Saietta calls its patented design an ‘Axial Flux Traction’ (AFT) motor.

In conventional ‘radial gap’ motors, the geometry is cylindrical: the stator is the stationary part which encloses the rotor and carries the electric current from the power source; the rotor, or moving part, is “excited” by the current and rotates, thus producing torque around the axis. The gap between the stator and the rotor, in this arrangement, is around the axis of rotation – hence it is called a ‘radial’ gap.

Saietta’s motor uses an entirely different geometry. The axial flux motor is pancake-shaped rather than cylindrical, meaning that the gap between the stator and the rotor is parallel to the axis of rotation. The upshot is that Saietta can produce an incredibly compact motor which – according to the company’s claims – is highly efficient, power dense, and low voltage. The size and shape of the AFT allows for a snug fit inside the wheel. 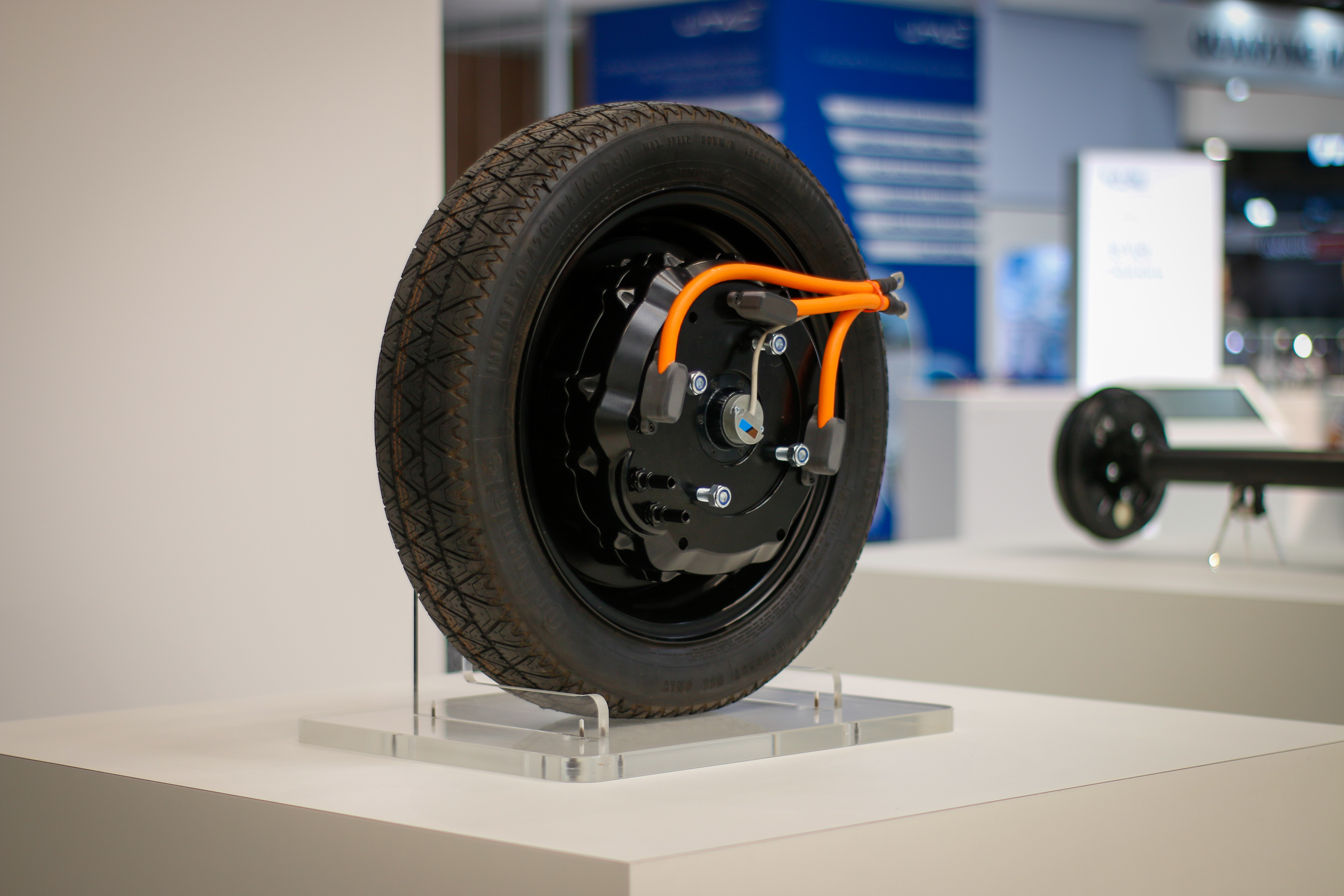 It is ideally suited to smaller vehicles. The AFT was designed for scooters, motorbikes and rickshaws; but Saietta has since expanded the potential applications. It recommends the pancake motor even for buses. At the IAA, it showcased two products: one was an electric axle with integrated power electronics and modular gearbox, designed for very light last-mile vehicles up to 2 tonnes GVW; the other was an in-wheel motor with integrated transmission and brake, which would be suitable for waste collection vehicles and autonomous people carriers as well as the last-mile. The company has even extended the AFT technology to marine applications, with an above-water motor for small crafts. 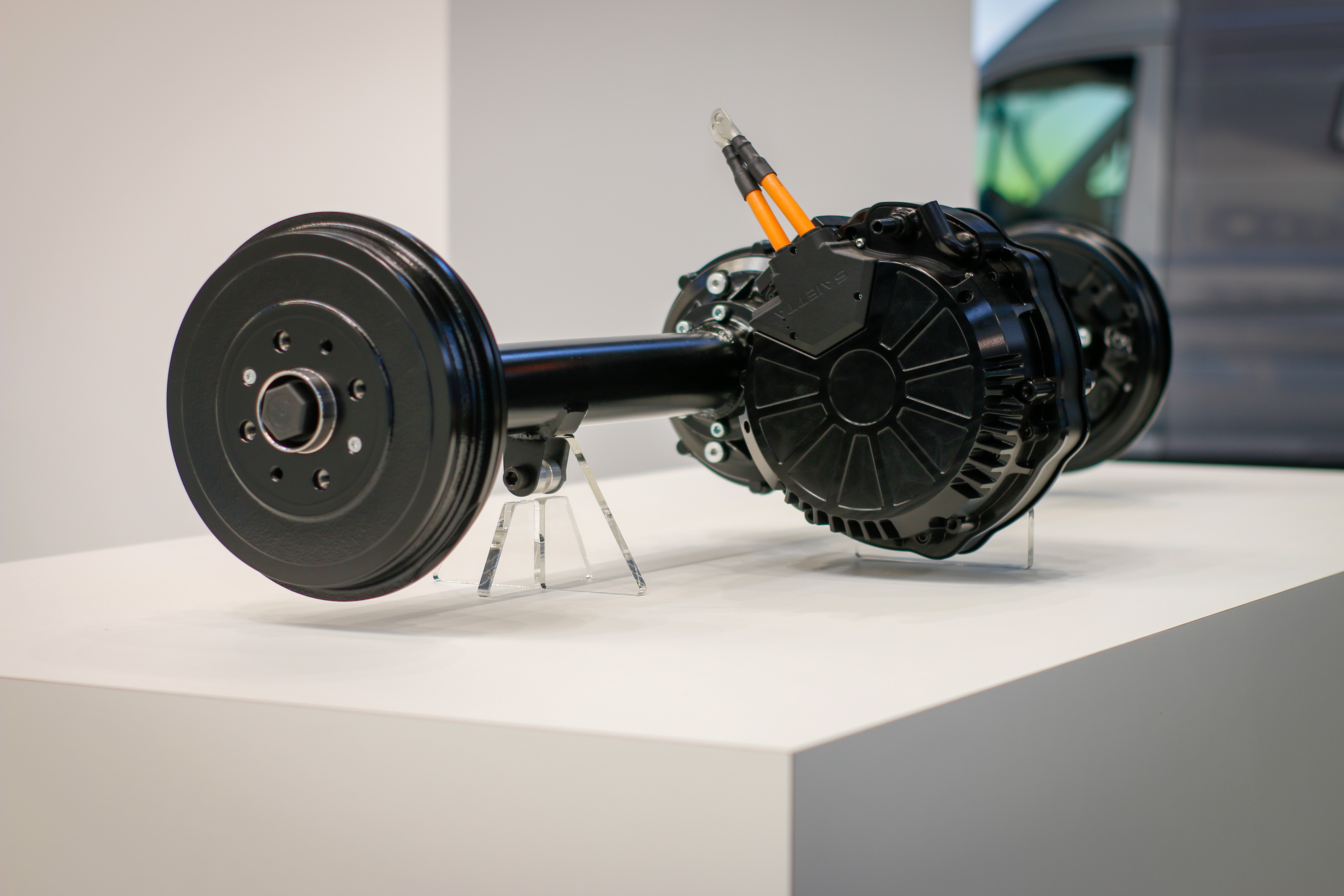 Saietta’s patented axial flux motor is not, however, well-suited to heavier applications. At the IAA, it displayed for the first time two concepts which follow more conventional designs.

The central motor concept (pictured above) is targeted at trucks. It is an integrated powertrain system with motor, inverter, cooling-system, and a planetary gear fixed-ratio transmission in a single housing. To make it “plug and play”, Saietta incorporated an oil pump, a standardised mounting flange, an integrated tachograph sensor, DC HV input connectors, and a position sensor assembly.

The heavy-duty eAxle concept – not to be confused with the electric axle product mentioned above – is targeted at truck-trailer combinations. Two motors are situated back-to-back in the centre of the axle, both being connected to a single wheel hub. The transmission is integrated with the twin motors. 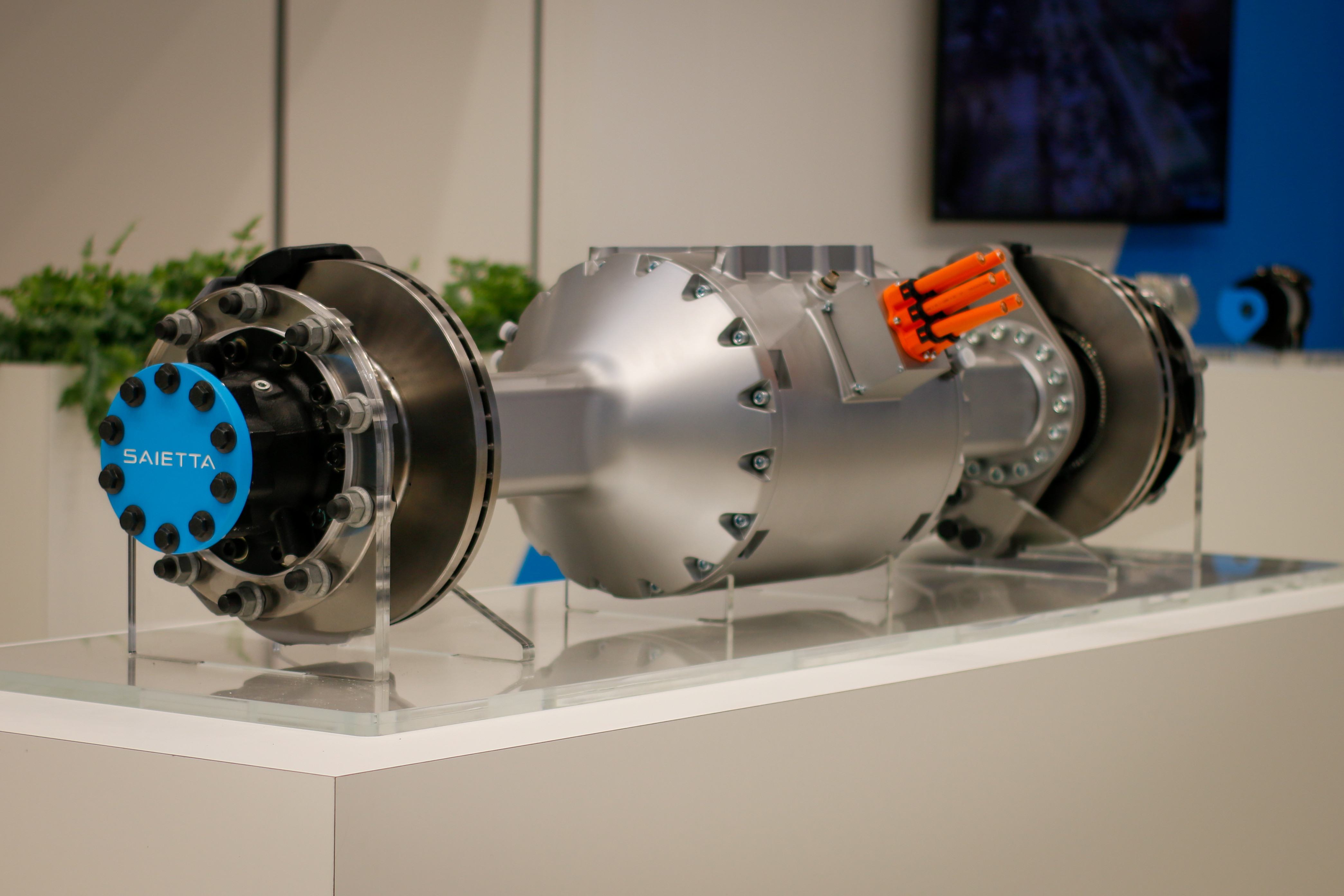 For the “integrated system” design of these motors, Saietta is indebted to the contribution of e-Traction. The inverter uses silicon carbide field-effect transistors, a relatively new type of semiconductor which have lower resistance and thus improved performance. Saietta states that the engineers in Apeldoorn have been crucial to advancing the development of its integrated inverters.

When Saietta acquired e-Traction, its industrial capacity expanded significantly. The number of engineers employed by the company doubled overnight as it took on 60 employees based in Apeldoorn. The acquisition also put a whole new production facility in Saietta’s hands, capable of manufacturing high-end power electronics. This has benefited the design of the company’s motors across the board, including the AFT motors for lighter applications.

The British company is now putting its Dutch capital to good use. Currently, its products for heavy-duty applications are undergoing testing at the Apeldoorn facility. Trials and series production are set to follow in the coming year. Though it is still primarily involved in the lightest vehicle segments, Saietta is a name we might be hearing more of in the CV industry in the coming years.

1 The AIM, or Alternative Investment Market, is a sub-market of the London Stock Exchange primarily for smaller enterprises to raise capital.

BorgWarner set to spin off Fuel Systems and Aftermarket segments

36 units of the Volvo FL Electric range of medium-duty trucks will be employed in Team Global Express’ Sydney-based pick-up and delivery fleet.

Siemens will provide its expertise in building charging infrastructure and developing software and control systems for energy management to Volta Trucks customers subscribed to its 'Truck-as-a-Service' offering.