USA – Hyliion Holdings Corp, an electrification specialist based in Cedar Park, Texas, announced in August it has entered into a definitive agreement with General Electric Company (“GE”) of Boston, Massachusetts to acquire a fuel-agnostic power generator developed by a division of GE called GE Additive.

The technology, called ‘Karno’, is designed to generate power from over 20 different fuel types, including hydrogen, natural gas, propane, ammonia, and conventional fuels. The generator is made by metal additive manufacturing or 3D printing, which involves fusing materials layer by layer by an automatic process following a CAD or digital 3D model. Karno uses heat to drive a sealed linear generator to produce electricity. The heat can be made by reacting fuels through flameless oxidation or by renewable sources. GE claims the technology is 20% more efficient than conventional generators available today and could even be superior to most fuel cell systems.

Hyliion is currently developing a retrofit hybrid powertrain for installation in Class 8 trucks: called ‘ERX’, the series-hybrid system uses natural gas to power a generator which, in turn, charges the batteries that supply energy to the traction motor. With GE Additive’s fuel-agnostic technology, Hyliion will be able to develop a powertrain that will run on a wider range of fuel types, including hydrogen.

Hyliion will acquire the technology and integrate the Cincinnati, Ohio-based engineering team that developed Karno into its own operations for a sum of USD37m. GE will receive USD15m in cash and approximately USD22m in Hyliion shares. The transaction is set to complete by the third quarter of 2023. 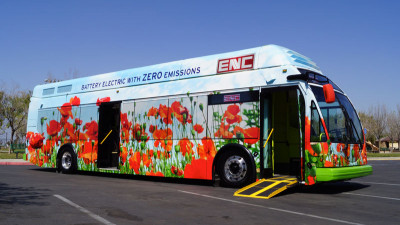 Proterra to supply batteries for ENC’s Axess range of buses

The company currently has more than 450 electric terminal tractors operating in trailer and container handling across the country, including more than 40 units in its growing rental fleet.

According to Meritor, the PCAS will provide intelligent control over electric powertrain sub-systems and accessories, allowing for the entire electric drivetrain to be fine tuned in order to balance performance, efficiency and range.